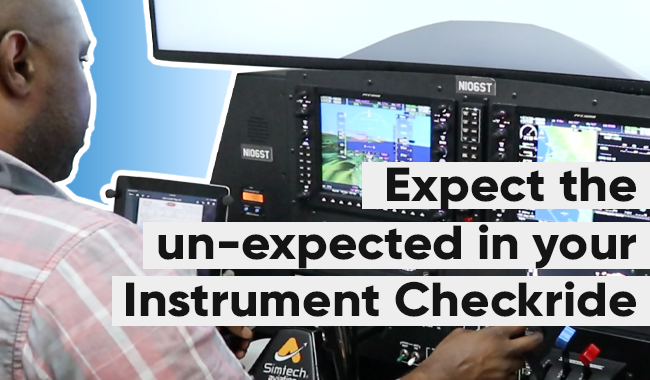 As of December 2019, I am an Instrument-Rated Private Pilot! The means AND the end were challenging, but worth it. I had heard that the instrument checkride was not like any other, and about a month into my instrument training I found this to be true.

What you expected from my instrument rating?

I began training for the instrument rating in October 2018 from Republic Airport in Farmingdale, New York. It took 14 months, two instructors, and who knows how many dollars to complete and get to the checkride. With my schedule, I estimated the whole thing would take a year at the most, so I ended up over time and over budget. I felt great relief and a bit of apprehension when I received the all-clear from my instructor (CFI) to take the checkride - set for December 8, 2019.

The day of the checkride: Do you have everything you need?

The checkride was scheduled to start at 1 p.m., far later than when I usually fly. I took public transit and an Uber on the two-hour journey from my home in Brooklyn to the airport, the first time I had done so. I wanted to be relaxed and have the opportunity to prep for the oral exam. It was a decision that I would slightly regret. The Designated Pilot Examiner (DPE) was 30 minutes late. No problem - I’ll get in some more study time. However, instead of preparing, I soon found myself worrying over a myriad of things:

-Would there be a missing endorsement in my logbook?

-Would I come up short on certain topics during the oral?

- I only have the rented Skyhawk until five that evening so will we have enough time to complete the checkride?

-Would I have to wait up to two hours for the two hour train ride home?

3 out of 4 of these concerns would later be realized.

Prior to the DPE’s arrival I noticed a missing endorsement. It was FAR 61.39--you know, the one about having received adequate training in the previous two months and that you’re not in a position to waste the DPE’s time? Well, that signature line was blank and I couldn’t believe I had not noticed until that point. I frantically by text messaged my instructor to send it back to me by email. The DPE was merciful in the fact that he agreed to wait it out until I received what I needed from my CFI. Neither of us had any subsequent plans. Oh, there were also issues with the application on the IACRA website, causing further delays. We spent time chatting about military aircraft and other tangential topics like music and movies. Some time later, a check of my phone revealed the delivery of the needed endorsement. We then pressed on.

The oral portion of the checkride

The oral test was a bit longer than what I heard was the standard 60 to 75 minutes. It wasn’t all business; again we veered off topic a couple of times into pleasant conversation. I forged my way through it and did fairly well.

Ready to fly at night?

It was at this time that I noticed the sun low in the sky and realized that most of this checkride would be at night. (I had spent a few night hours under the foggles so this wasn’t exactly foreign to me, but I mentally did not sign up for this type of practical flight test.) We extended the plane rental period and I preflighted with flashlight in hand, trying to deduce if my slight shivers were from nerves or the steady drop in temperature (weather conditions were near perfect that evening). Preflight complete and we taxied out to runway 19.

Most of the time I am the first person to rent a plane in the morning. This is because I like to beat traffic both on the ground and in the air. The airspace above metropolitan New York is some of the busiest in the country and with the perfect flying conditions that evening, plenty of pilots were out. For me, it meant 30 minutes on the ground...waiting. I used this time to determine that my shivers were definitely from nerves.

We  were finally cleared for an expedited takeoff at 4:40, about 10 minutes after sunset. Once we were over Long Island Sound, he first had me do an unusual attitude recovery followed by a couple of steep turns. In the cool and dense night air, I handled those turns perfectly! The DPE then told me that the next task would be the bane of my instrument training - holding. Admittedly, I was a mess internally while exuding confidence as I approached the holding fix. I kept on the holding side and within test standards though the maneuver itself was quite sloppy.

Beyond any doubt, the New York Tracon (ATC) is busy at all times of the day but this is especially true at night. It is not uncommon for requests of practice approaches to be denied because of insufficient staffing or traffic volume. This is the reason that was given when we made our request to do an ILS  approach followed by a localizer approach to the same runway. The DPE informed ATC that this was a checkride and they took exception and accommodated us. Still nervous, still shaking, I performed both approaches and terminated both with a missed approach before going back to Republic for the final circle-to-land approach.

I had the least experience with the circle-to-land but it honestly went perfect. Calm winds and a significant decrease in traffic from when we departed assisted me in successfully completing that task. I landed the 172 nearly 2½ hours after we left, exhausted and happy that it was over. I was unsure of whether or not I had passed the checkride (I had forgotten that the DPE would have told me in the moment if I had failed to pass a maneuver).

It was nearly 7 p.m. on a Sunday night, so the office was empty when we returned. I passed and just needed to finalize the IACRA application submission with the DPE. With the timing of this in mind, I checked the schedule and knew that it would be at least an hour before I would be on a train heading home. After the afternoon I had, I just wanted to be home with my wife and daughter, and have a much needed beer!

Reflecting upon the journey

I had been training for over a year, almost non-stop and it ended, successfully. It was a daunting experience and I decided to take a little time off from flying. I had done too many preflights in near-freezing temperatures so winter would be the perfect time for such a hiatus. I’m going to decompress, spend some time with family, and let the itch grow slowly before I launch into training for the commercial certificate.

The top five things I learned from this chapter in my career are:

1. Double-check all the endorsements. Then triple-check them.

2. Until the examiner tells you that you failed the checkride, keep on doing your best!

3. Expect the unexpected. Instrument training can take a lot longer than planned.

4.Expect the unexpected. The checkride can take a lot longer than planned.

5. Stress is normal and the DPE likely understands. Allow patience and don’t be hard on yourself.

Doug Wint is a pilot living in New York City. In addition to writing for Simtech Aviation, he also has published articles with NYCAviation and https://www.fartherfasterhigher.com/ . You can follow him on Instagram and Twitter. His upcoming blog is Farther, Faster, Higher is under development and will debut in early 2020.

How to get Instrument Rating New York?

How to stay instrument Current in Manhattan or do an IPC